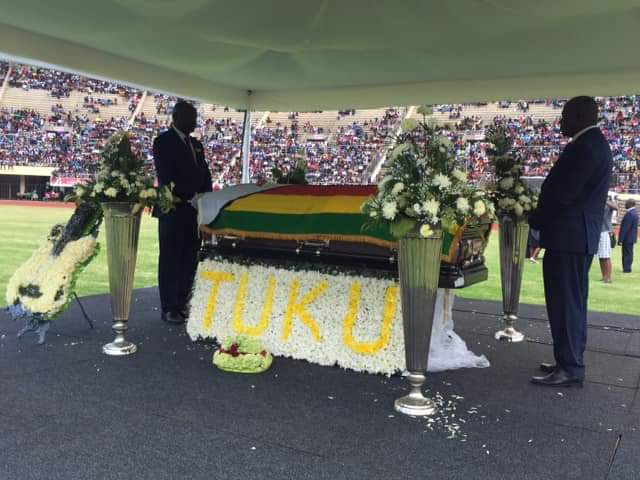 The funeral of the legendary Zimbabwean music icon, Oliver Mtukudzi on Sunday at Kasimbwi village in Madziwa set all time records.

The Zimbabwean international gave up a two decade battle with diabetes on 23 January having recorded 66 albums in his 40 year career which sent him across the earth delivering his product, Tuku Music.

In terms of demographics, Tuku's funeral was like a giant church crusade, attended by all ages and the unborn. All races had representatives while ambassadors from across the diplomatic community in Zimbabwe braved the smouldering Mashonaland Central heat and thronging crowds. Friends, relatives, followers and business partners swarmed the country from all continents via the Robert Mugabe International Airport. Some drove from neighbouring countries.

The vehicle population burst the roads with the ZINARA staff at the manually operated Bindura-Shamva road toll gate left at the brink of failure to manage the unusual vehicle toll.

Having been awed by the global sized charisma of the lanky musician, government felt obliged to award the late Mtukudzi with the highest honour on the land, a posthumous National Hero status conferment.

An all night musical gig reverberated the sleepy plains of the humble rural Kasimbwi community with both near and afar neighbours getting a first time taste of live music from their favourite old time and new time musicians. A sizeable number of the music new timers were moulded at Tuku's philanthropic  arts joint, Pakare Paye in his hometown of Norton just outside Harare.

Driving off Tuku's burial ceremony took even an aggressive driver a good four hours to find his way. Businesses on the Bindura-Mt Darwin road cashed in as teems of travellers stopped by for travel conveniences, food and drink. Enterprising traders set temporary trade stalls to serve the mourners as they took time to celebrate a life well lived.

Despite the busy farming season, no family near or afar could be seen in their field. Mourners from the farming countryside came from as far as the horizon to bid farewell to one of their own.

International artists from the continent arrived in Mashonaland Central for the first time to give Tuku a deserved hero's send off.

In a discussion with Harare Post, Zakariya said his hometown had lost an extraordinary citizen. "Tuku's musical journey has proven stereotypes wrong. People had the misconception that doing secular music is ungodly. Look here, Tuku has been given a dignified church driven burial. Doing guitars is a job like any other. Worshipping God is quite another thing divorced from music. Tuku was good in both, hence this bumper crowd here,” said the Norton resident musician.

Oliver Mtukudzi was a unifier, an entertainer, educator and philanthropist who gave his all to mankind. Speaker after speaker spoke glowingly of the departed icon, with President Emmerson Mnangagwa saying Zimbabwe was poorer without Mtukudzi. Tuku's legacy did not thrive without carrying the Zimbabwean star on its back. Wherever Tuku went with his Black Spirits band, the name of his country was mentioned with a frenzied media interest.

Tuku is survived by his wife Daisy and four daughters.

We have 125 guests and no members online