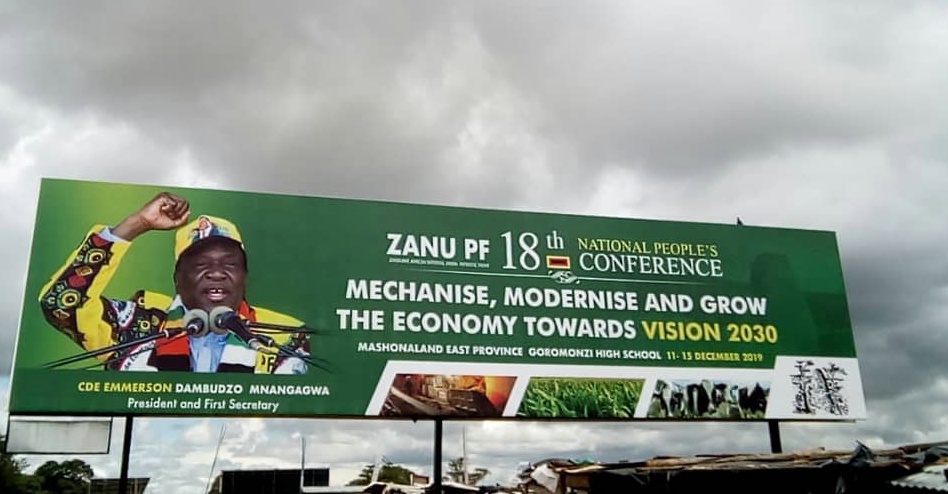 Since the 2018 Harmonised elections, ZANU PF as the ruling party in Government has been turning its Manifesto blueprint into deliverables. So much progress has been noted in such areas as road construction, housing, agriculture and information technology among others, ensuring that Vision 2020 of a middle income economy is achieved.

The country has witnessed road construction projects being accelerated so as to enable the ease of travel, thereby easing the way of doing business. Construction on such on-going road projects such as the Harare- Beitbridge road, Kwekwe-Nkayi-Bulawayo Road and Binga-Karoi road is continuing at break neck speed and the country is going to realize their completion sooner than expected. It is notable and suffice to say a lot was done in rehabilitating the roads in Manicaland following the Cyclone Idai disaster.

In the bid to support the irreversible Land Reform Programme spearheaded by ZANU PF 2000 Manifesto, ZANU PF embarked into various agro-projects to support new farmers, in a bid to increase crop and animal production. On Mechanisation, the ZANU PF Government recently engaged John Deere, an American supplier of farming implements to supply tractors, combine harvesters etc to the Zimbabwean farmers on a Government facilitated deal. The deal created an opportunity for the local farmers to access financial capital in securing farm implements, aimed at increasing crop production.

The ZANU PF Government further embarked on Smart Agriculture, a programme which is going to change the face of agriculture in the country, as it encourages modern ways of farming aimed at increasing productivity on farms. The Pfumvudza concept quickly comes to mind as it oversees the intensification of crop production through concentration of resources on a small land unit using optimum management.  Efforts are also being carried out to increase the national herd through empowering farmers in the animal husbandry sector of Zimbabwe’s agro-economy. Farmers are being facilitated to access cattle at subsidised prices; a loan facility which is also friendly to the farmers. The ZANU PF government is also pursuing the same scheme in piggery, poultry, and fisheries among others. The manifesto supported by the ZANU PF 18th Conference Central Committee resolutions from thematic committees was very clear on the direction in which the party should steer the economy toward.

On mining investments, the ZANU PF manifesto was non-negotiable on the indigenization policy, but being friendly to the use of mining exploration and extraction technology (Indigenise and Mechanise). The ZANU PF Government has enabled increase in production through the ease of doing business by realigning its policy on mining to accommodate contract miners. We have witnessed an increase in production at Zimplats, Rio Tinto and PPC, just to mention a few. The First Secretary of ZANU PF and President of Zimbabwe, Cde E.D Mnangagwa was recently in Hwange to officiate at two more mines which are on expansion projects, which would witness increased energy generation, addressing the power shortage in the country.

On Modernization, the ZANU PF Manifesto is clear that technology is an unavoidable development as it has become the people’s way of life. Recently, we witnessed Telone adding more internet gateways, increase commercial broadband infrastructure to the public through its Fiber-To-The-Home (FTTH) and ADSL models. Telone, the leading Government-run enterprise in the ICT industry constructed three data centers to accommodate the Zimbabwean populace in the wake of a high demand for remote business solutions. Telone has increased the capacity of its back bone network to 42Gbps of internet speed via three different gateways.

The ZANU PF Manifesto was also clear on the Party stance on corruption, and to this effect, the First Secretary of ZANU PF and President Emerson Mnangagwa introduced the special courts which are dedicated to corruption cases only among other anti-corruption measures. In the recent months, we have witnessed an increase in the convictions of high profile people on corruption charges and Dr Obadiah Moyo, the former Minister of Health and Child Care was recently fired for flouting procurement procedures.

On the ZANU PF 18th Conference, the Central Committee Resolutions recommended for the Land Audit report to be availed. This was to pave a way forward on how to deal with multiple farm ownership and Minister of Lands, Agriculture, Water and Rural Settlement, Rtd Air Marshal Perrence Shiri stated that the land audit exercise is being finalized. To date, indeed the Minister has toured all provinces on this regard, and encouraged the public to apply for land as some farms will be downsized to accommodate others. This is the drive towards the Indigenization of the Agriculture industry as penned in the ZANU PF Manifesto.